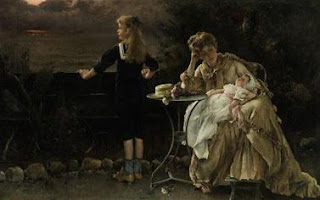 The American version of Mother’s Day started almost 150 years ago with Julia Ward Howe’s Mother’s Day Proclamation of 1870.  famous for her war poem “Battle Hymn of the Republic.” Her Mother’s Day Proclamation was intended to be a type of war poem as well, one calling all mothers to action in opposing all types of war. Her attempt to get formal recognition for a Mother’s Day of Peace failed. All was not lost, though. Julia Ward How suggested the idea of Mother's Day, but it was Miss Anna M. Jarvis (1864-1948), of Philadelphia, who began a letter-writing campaign to a variety of influential people that made Mother's Day a national holiday.   Anna Jarvis, who had started organizing women throughout the Civil War to work for better sanitary conditions for both sides during what she called “Mother’s Work Days.” Her daughter, also named Anna Jarvis, would go on to carry out her mother’s work and hold the first Mother’s Day celebration in West Virginia is 1907 in the same church that her mother had taught Sunday School in. 45 states began celebrating the custom and the holiday was declared official by the states in 1912 and by the President in 1914.


In 1907 Anna persuaded her mother's church in Grafton, West Virginia to celebrate Mother's Day on the second anniversary of her mother's death, the 2nd Sunday of May. By the next year, 1908, Mother's Day was also celebrated in Philadelphia.   But the first "official" service was on May 10, 1908 in the same church, accompanied by a larger ceremony in the Wanamaker Auditorium in the Wanamaker's store on Philadelphia.  She then campaigned to establish Mother's Day first as a U.S. national holiday and then later as an international holiday.

The holiday was declared officially by the state of West Virginia in 1910, and the rest of states followed quickly.

In May, 1913, The House of Representatives unanimously adopted a resolution requesting the President, his Cabinet, members of Congress, and all officials of the federal government to wear a white carnation on Mother's Day. Congress passed another Joint Resolution May 8, 1914, designating the second Sunday in May as Mother's Day

On May 8, 1914, the U.S. Congress passed a law designating the second Sunday in May as Mother's Day and requesting a proclamation. On May 9, 1914 President Woodrow Wilson issued a proclamation declaring the first national Mother's Day as a day for American citizens to show the flag in honor of those mothers whose sons had died in war.
In 1934, U.S. President Franklin D. Roosevelt approved a stamp commemorating the holiday.
In May 2008 the U.S. House of Representatives voted twice on a resolution commemorating Mother's Day] the first one being unanimous (with 21 members not voting). The Grafton's church, where the first celebration was held, is now the International Mother's Day Shrine and is a National Historic Landmark.

The carnation became the flower known for this day, Anna Jarvis gave 500 of them at its first celebration in 1908. Many religious services held later copied the custom of giving away carnations. This also started the custom of wearing a carnation on Mother's Day. The founder, Anna Jarvis, chose the carnation because it was the favorite flower of her mother  In part due to the shortage of white carnations Carnations have been used to represent Mother's Day, since Anna Jarvis delivered, and in part due to the efforts to expand the sales of more types of flowers in Mother's Day, the florists promoted wearing a red carnation if your mother was living, or a white one if she was dead; this was tirelessly promoted until it made its way into the popular observations at churches.
Posted by Mary-Ann at 2:33 PM